The animal world of Lori Faye Bock . . . filled with charm, wit, and lots of love. By Charlotte Berney They glower and stare, smile and smirk, instances that are half creature, half human, and poignant and funny all at once. An observer summed them up as “animals with attitude.”

Lori Faye Bock’s marvelous critters have been charming a whole new audience since she set aside her clay for paint. A well-known ceramist with over 20 years of experience, Bock has made an easy transition to painting while retaining her ability to delight.

“Suddenly, I was getting it from all sides,” she says of painting. “My neighbors let me borrow their paints and an easel. My brother (an artist who works in encaustic) sent me his paints, brushes and easel; and then there was my husband who kept encouraging me to paint. Once I began, it felt so right!” 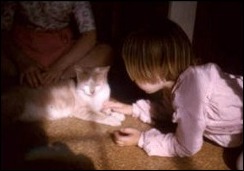 Bock remarks she receives “constant affirmations” that she is doing the right thing and adds, “I’m having so much fun! Sometimes I paint 16 hours a day.” She generally works with acrylics on paper. The artist, who radiates energy and enthusiasm for art and life, works in a setting of exquisite beauty, the Chama River Valley north of Abiquiu in the farming community of Los Silvestres.

The compound where she and her stockbroker husband, Richard, have lived since 1990, includes a 250 year-old adobe home which they are remodeling themselves, pens for their sheep and other animals, and a lovely Basque – a forested area of cottonwoods – along the river. Their life is enlivened by a menagerie of dogs, cats, sheep, ducks, and geese. “I grew up in Detroit,” Bock comments, “where my father was a city planner and watercolorist and my mother a teacher. But my mother had been raised on a farm in North Carolina where they grew tobacco and cotton. I used to visit the farm as a kid.” 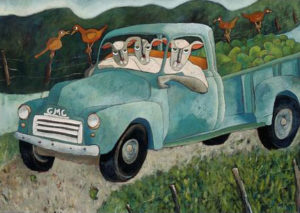 Later she got a scholarship to study ceramics and earned a degree in education. She taught school in the Watts area of Los Angeles for five years (“You have to have a sense of humor to teach first grade in Watts!”) Meanwhile, her decorated ceramic ware gained a wide following.

When she first came to Santa Fe in 1989, Bock had a studio/gallery on Gypsy Alley off Canyon Road before moving to Los Silvestres. Now happily immersed in the rural life, the couple finds time to grow an organic garden, cook gourmet meals, care for their animals, found and organize the annual Abiquiu Studio Tour, and publish The Abiquiu Post, a newspaper of art, culture, news and organic farming. One senses, however, that the animals come first for Bock. 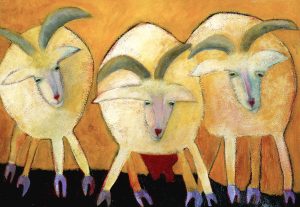 “I spend a lot of time working with our animals and observing them”, she admits. I tend to humanize them in my art, but I truly paint expressions that I see. I feel that animals have almost human emotions, and this shows in their eyes.” We walk down to the sheep pen where a flock of healthy, alert animal friends cluster around in hope of apples from the nearby trees. They are not disappointed as Bock tosses green fruit over the fence to them. “There’s an intensity to animals,” she points out. “I use color and textures to portray this intensity, and I also like to play with forms and shapes. Perhaps this comes from working with clay.”

Bock’s skill with ceramics has transferred to her paintings in others ways. When she created her ceramic designs, which almost always featured animals, she scratched designs into clay. Today, she uses a clay tool to scratch into layers of paint to achieve her effects. Layers of underpainting are used to create interesting textures reminiscent of her clay work. The aspect of Bock’s art that captures the attention of most viewers, however, is the variety of priceless expressions and jaunty attitudes of her subjects.

Her titles sparkle with wit: one painting of a cat on the piano is called “Nocturne in C. C is for Cat.” Another cat painting is entitled “One Fish, Two Fish, Blue Fish, Who Ate the Red Fish?” A few wistful-looking sheep are dubbed “Loose in Los Silvestres;” one bemused sheep is “Timid and Shy and I Don’t Know Why.”

But beyond charm and whimsy is the instant recognition that she has captured the truth of her subjects. Years of close observation, her artist’s eye, and an innate sense of joie de vivre have come together in creations that have achieved instant popularity. The people who like my work,” the artist feels, “have a sense of humor and love animals as much as I do. I believe they enjoy taking those animal feelings away with them.” The animals in the paintings are those she sees every day and calls by name. Some were found abandoned and rescued by Bock. They eat only healthy organic food. The result of all this is a loving environment for humans and animals.

We sit in the grassy area along the river, framed by tall cottonwoods. The place provides an ideal, secluded spot for the dogs to run free and for the people who come here to relax and dream. The artist remarks, “There’s a certain naiveté in my work, but it reflects my life. I’m happy living here and painting. When I paint, I don’t agonize or think too much about it. I have fun working. And I don’t limit myself in any way. I just follow my heart.”

Reprinted with Permission of Focus/Santa Fe