Lori Faye Bock and her husband purchased an old adobe farmhouse, formerly known as the site of the historical Plaza de Los Silvestres, an agricultural settlement, just above the tiny hamlet of Abiquiú, New Mexico in 1990. 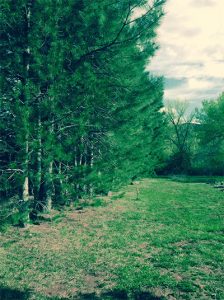 After extensive expansion and renovations, the Bocks moved into their home along the Chama River. Prior to relocating, hundreds of Austrian and Ponderosa evergreen seedlings were planted on the eight and a half acre farm. In addition, they inherited hundred year old apple trees, including Winesap, Golden Delicious and Red Delicious as well as a variety of apricot and white peach trees. In more recent years, an assortment of cherry trees have been planted along with more apples trees, including Esopus Spitzenburg and Honey Crisp. During the spring and summer months, irrigation takes place via the Abeyta Trujillo Acequia (ditch) which was hand dug by early Spanish settlers during the period of 1734/1735.

Many cats have taken up residence in the adobe compound structure with all rooms, including Lori’s painting studio, leading into a courtyard with 10 foot walls which enable the felines to experience the outdoors … catio style. Bird feeders are strategically placed around the exterior of the house which provides the ultimate in entertainment for the cats and artist alike. In addition, a large dog kennel (with all the amenities … cat condos, litter box, food, water and most important, many layers of shade cloth) placed on a table five feet away from where the birds perch, nosh and converse allows for heightened excitement. 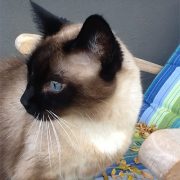 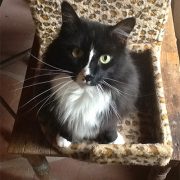 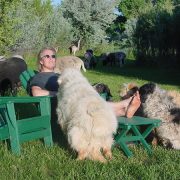 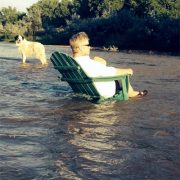 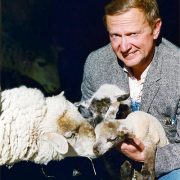 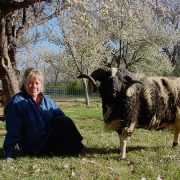 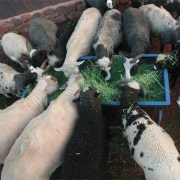 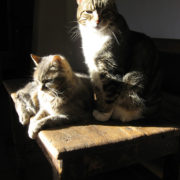 Through the years, the Bocks have enjoyed the company of many beloved dogs … primarily the Great Pyrenees breed who not only protect the sheep from predators (coyotes, bobcats, bears, eagles and owls) but also provide wonderful companionship, day in and day out. We are pleased to relate the Great Pyrenees have taken their job seriously as none of our animals have ever been harmed by strangers.

Von Bock Farm is named for the ancestral roots of Richard Bock, Lori Faye’s husband. The farm is known by locals for the distinctive flock of Jacob sheep which trace their lineage back to the Book of Genesis. They have very fine black and white fleeces as well as two to six horns. Through the years other breeds have inhabited the farm as well. Merino, Suffolk, Perrindale and Churro have been bred with the Jacobs producing a magnificent flock of spotted sheep. At one time, the flock surpassed 65 in number … and they all had names! Nowadays, the majority of the sheep have moved on and others are approaching their teens. But because we are shepherds, they will be cared for til they take their last breath. We want them to enjoy the rest of their lives peacefully here on the farm.