Lori Faye Bock’s eyes shine as she describes her farm north of Abiquiu along the banks of the Rio Chama. She knows each of her sheep, geese, and ducks by name. Four cats and six dogs complete the menagerie.

“I’ve always loved animals and had animals,” she says. “I spend a good part of my day with my animals, observing and caring for them. My art is closely related to my life.”

Bock’s poignant and humorous portrayals have a soulful quality. Anyone who has ever had a meaningful conversation with a cat or declared love to a dog will understand. Her animals bristle with character and presence, while intense, rich color provides visual excitement. The saucy titles and phrases she adds make a perfect accompaniment. That Bock takes delight in creating these images is readily apparent. 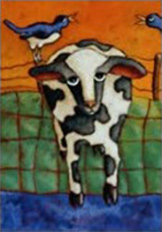 These engaging paintings have quickly gained popularity with an enthusiastic audience beyond her imaginings.

“People recognize characteristics in their own animals.” she explains, “and it makes them laugh. That’s my goal. I’m very serious about what I do – but I want the joy to be the main thing. It’s my reason for painting. I love it when the gallery staff tell me they hear laughter and know someone’s standing in front on my work.”

Growing up in Detroit seems a far cry from a farming community in northern New Mexico, but as a child Bock visited the farm where her mother had grown up in North Carolina. A scholarship in ceramics set her on an artistic path and a degree in elementary education resulted in a five year teaching job in the Watts area of Los Angeles. Over time, the popularity of her decorated ceramic ware enabled her to work at art full-time. 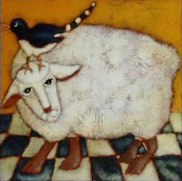 When Lori Faye and her husband Richard first moved from California to Santa Fe in 1989, they lived in town and she maintained a studio/gallery on Gypsy Alley off Canyon Road. They soon bought the property near Abiquiu in Los Silvestres where they live today, a 250-year old house on acreage that was once a Spanish land grant. Remodeling their adobe complex, caring for their animals (which include the Biblical Jacob sheep), tending their fruit trees (apples, apricots, cherries, peaches) and organic herb garden, and enjoying the beauty of the cottonwoods and the river, make for a rich and engrossing life.

Meanwhile, the artist loves sketching outside with her animals and working in her studio, where there’s usually a cat or dog to keep her company.

Bock began painting several years ago after enjoying a successful career in ceramics for 20 years. Following the rapid acceptance of her paintings, the artist entered into a new phase of her work, adding several fresh elements to it.

They Didn’t Even Invite Us

Her first adventure was in trying different techniques “to express more fully what I wanted to say.” She began applying thin layers of paint and glazes to achieve depth in the paintings. The images also became softer. She comments, “I want to accentuate the soft and lovable aspect of animals in paint, to portray them with more subtlety.”

Another new development is her emphasis on words. From the start, Bock has created witty titles for her paintings but now she’s using words more freely, as part of the work. “When I’m painting,” the artist says, “Words and phrases just come to mind. I like combining them. The words are really important to me.”

Three new series are in the works for Bock. “I’m planning a Laundry series,” she informs, laughing. “Why? I love hanging my clothes out to dry. It’s very relaxing. I want to do works in general that relate to relaxing. The world is so crazy, with so much bad news, and it’s stressful. I wish that people could just slow down and take a walk by the river. Or go outside and hang out their clothes.” 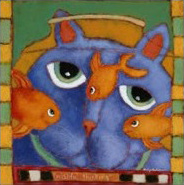 Another series is on Pet Advocacy. The artist says the more she is involved with animals, the more she sees how important this is. “There are just so many issues and so many ways that animals need our consideration and our care. I feel that if people were more aware, they would do things differently.” With that in mind, she has volunteered at the animal shelter in Espanola and contributed art to humane causes.

This year, Bock donated a painting that was used on the poster for the American Humane Association’s Tag Day 2000, a national campaign to raise the consciousness of pet owners to identify pets through tattoo, microchip implant and traditional tagging. While some 4,000 animal shelters participated in Tag Day 2000, New Mexico became the first state to recognize the efforts of local shelters, the American Humane Association, and Lori Faye Bock. Governor Gary Johnson signed a proclamation declaring April 8th Tag Day after the New Mexico State Senate passed a similar resolution unanimously.

The Tag Day painting, “I Will Protect You,” depicts a dog and a cat in a loving relationship. She’s been asked to contribute the art for Tag Day 2001 as well.

Not Sure About This Big City Stuff

A third series is close to her heart – Animals in Their Twilight. “People who have animals know that they go through stages just as we do, they mature and enter a different phase of life when they become slower but wiser. As with people, there’s a beauty and dignity to this time of life.”

Bock is also emphasizing drawing to a greater extent in her paintings now. “I’ve always loved drawing and I’ve decided to let my lines show through. I want to create recognizable forms but I don’t want to make them too realistic or too naive. I love the soft forms that suggest the animal.”

When Bock began painting, she worked mainly on paper, but today she paints on Baltic birch panel as well as on canvas. She also has an exciting new presentation in the works – painted contemporary birch boxes for the wall. She’s planning to create diptychs and triptychs with these handsome birch boxes.

Look into the eyes of Bock’s painted animals and you might see annoyance, stubbornness, confusion, smugness, or mischief – all too human feelings that the artist believes animals have. Her portrayals bring out the universal ways in which all beings – human and animal – are related, as well as the specific charms of each animal.

Lori Faye Bock and her paintings bring a message of love for creatures great and small. “If you have an animal, love and care for that animal and you’ll get so much back.” She says she feels “fortunate and blessed” to live the life she does, in a unique country setting surrounded by animal friends.