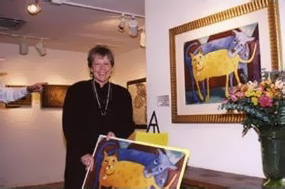 Over the years, Lori Faye Bock has received overwhelming requests from humane organizations around the country seeking donations of her original works of art. She decided the best way for her to use her talents and captive audience was to work with a national organization.

In the fall of 1998, an inquiry was made to the American Humane Headquarters in Englewood, Colorado. The organization was looking for an artist to create a poster image for their National Tag Day Campaign which falls on the first Saturday of April. Their goal was to distribute these posters as well as other educational materials to shelters nationwide in hopes of educating the public about the importance of properly identifying their companion pets through traditional tagging, tattooing or microchip implants.

The results of a nationwide survey conducted at 1000 shelters indicated a very small percentage of stray dogs (17%) and stray cats (2%) ever make it back home to their original guardians. The rest are lost forever on city streets, euthanized at shelters or adopted out to new families.