This story was featured in the September 2013 issue (Page 1 and 38 & 39) of Southwest Art magazine by Emily Van Cleve. 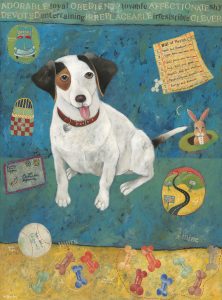 When painters Lori Faye Bock and Sharon Markwardt found out they were going to have a show together at Waxlander Gallery, they set up a lunch date to talk about a possible theme. “We were brainstorming and came up with the idea of focusing on eyes,” says Bock, who, along with Markwardt, loves painting animals. “In both of our works, the eyes are very important.”

The Eyes Have It! is presented at the gallery from October 1 through 14, with an artists’ reception from 5 to 7 p.m. on October 4. The more than 50 works illustrate the artists’ abilities to paint expressive eyes as well as their attention to detail. 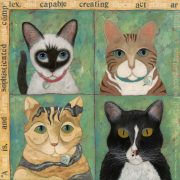 Animals on Bock’s farm near Abiquiu, NM, are muses for her colorful and playful acrylic paintings. A menagerie of indoor cats and dogs and a flock of sheep are Bock’s constant companions and models for her paintings. Among her two dozen pieces in the show, many depict animals looking intensely at the viewer. Bock describes her latest pieces as more realistic, detailed, and painterly than ever before. “Lori’s work has a naive, primitive, and fun interpretation of animals,” says gallery owner and artist Phyllis Kapp. “The eyes that Lori creates in each animal can be playful and ready to pounce in one image, then wise and motherly in the next.” 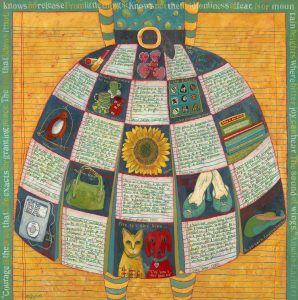 While cats and dogs inspire Bock, cattle and other ranch animals capture Markwardt’s attention. Markwardt is a fourth-generation Texan who lives across the street from longhorns that often find their way into her vibrant oil paintings. “Sharon sees into the animal and portrays its spirit with a deep insight that is joyfully felt through color,” says Kapp. “Every tiny brushstroke is visible and deliberate, creating a realistic image were it not for the way she interprets the hues.” 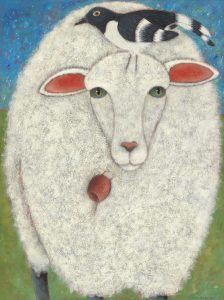 American wildlife started creeping into Markwardt’s paintings after she purchased a home in Santa Fe last fall and began spending more time in New Mexico. Some of the works in the show feature animals she has seen at the Wildlife West Nature Park in Edgewood, NM, including bears, bobcats, coyotes, and wolves. Bunnies and squirrels are the subjects of a few intimate pieces. “Often, I paint animals by themselves, but lately I’ve been interested in putting several animals together and showing the interactions between them,” Markwardt adds.

Although the visual image is paramount in their work, both Bock and Markwardt enjoy how words can enhance and empower an image. Markwardt likes to embed words like “strength,” “peace,” “dreams,” and “love” into the fur of her animals. Text and quotes are incorporated into some of Bock’s animal paintings and also a group of paintings from her Women’s Perspectives series, which depicts skirts, aprons, and dresses. “Sometimes it seems as if I spend as much time looking for good quotes to put in my paintings as I do actually painting,” says Bock. “I’m increasingly inspired by words and find they can inspire a new painting.”